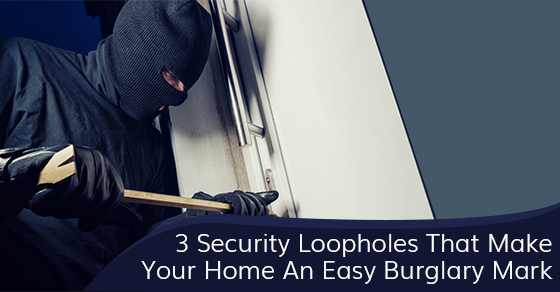 Crime can affect anyone. It is unfortunate when crime affects you directly or indirectly—either as a victim, or as a person who’s afraid of becoming a victim—both of which reduce your enjoyment of life.

Although many homeowners assume that burglars are “master criminals” who are highly organized and have access to specialised tools to get past home security systems, police crime reports suggest otherwise. According to a recent FBI crime report, the average burglar is usually a young individual looking for the easiest way to enter a home without being detected.

In some cases, thieves don’t even force their way into homes. In nearly 30 percent of all residential burglaries, thieves access homes via windows or doors that were left open when the residents left. Here are some of the most common ways that burglars invade homes.

The best way to protect your property from theft and your loved ones from the fear of an invasion is by installing a quality home security system. If your home has been broken into once before, reports suggest that the burglars may try their luck again soon, so it is important to contact a security alarm company to secure any points of weakness and prevent the burglary from re-occurring.